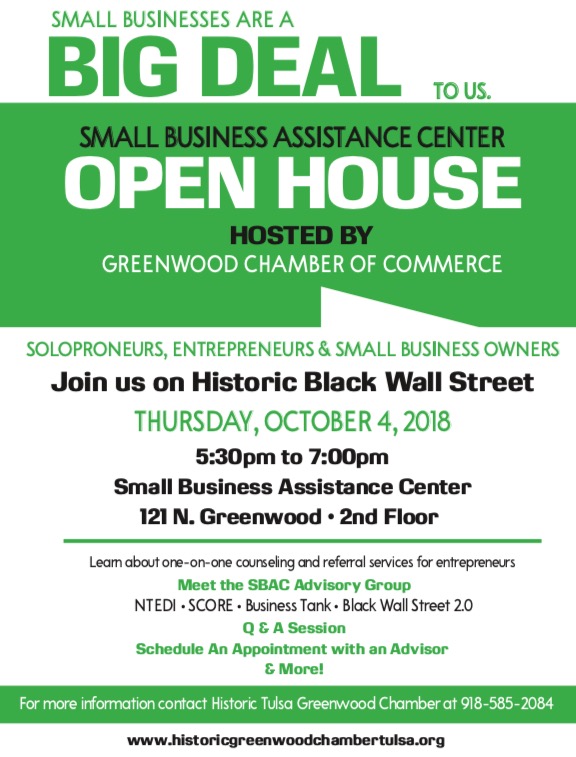 Black Wall Street and Beyond Discussion

Black Wall Street and Beyond Discussion and Brunch, Saturday, May 25, 2019, and celebrate with us the 98th Anniversary of The Oklahoma Eagle. ,

Be a part of this endeavor as NTEDi, City of Tulsa, TPS and The Oklahoma Eagle present and discuss issues with you, that support the rebuilding of Black Wall Street and the north Tulsa community. The forum was held at the Osage Resort and Event Center, 951 West 36th Street North.

Business in the Black Documentary

On Thursday September 27, 2018, Anthony Brogdon’s documentary film, Business in the Black (BITB), will be shown at Rudisill Library, 1520 N. Hartford Avenue in Tulsa, Okla.The film is being hosted by Mary L. Williams and the program will begin at 6:30 p.m.

Please continue to make time in your schedules and join us on the FIRST FRIDAY of each month as we focus collectively on spending money in the north Tulsa community. Thank you in advance for spending your money and patronizing businesses in north Tulsa!!!

The North Tulsa Economic Development Initiative, Inc. (NTEDi) in collaboration with State Representative Kevin Matthews and City Councilor Henderson are pleased to announce the December First Friday Business Gatherings on December 5, 2014; where we encourage all Tulsans to patronize established businesses in the north Tulsa community. We recognize that a challenge for most businesses is gaining visibility, so during the month of December we have committed to working with various businesses located in north Tulsa increase their visibility.

During the month of December 2014 we will be promoting retail, consignment shops and variety store types businesses. Supporting retail outlets in the north Tulsa benefits the community. The more Sales Tax that is generated in our community supports increased opportunities for economic development and growth.

Tulsa Community Invitation: Support and take advantage of valuable promotion and offers from featured businesses and other north Tulsa businesses.

Spend your money with a North Tulsa Business this Holiday Season!!!

A planned officer and apartment building would be a positive development for north Tulsa and it could take shape next year. The development would be near 36th Street North and Hartford.

There used to be business up there and more homes, but that was a long time ago.

Now a developer, with Tulsa Roots, wants to start turning that around.

The project, planned for 36th Street North, is the kind of development that would fit in any part of Tulsa, and that's on purpose.

Antoine Harris with Alfresco Community Development hopes to develop an office and apartment building in a part of town long overdue for revitalization.

Harris, James Cooper and Lana Turner-Addison all played a part in getting the project to this point.

They have a design and interest from banks on the financing and said they're confident two medical offices and a bank will lease space.

Above that would be 54 apartments for middle income tenants.

The design has covered outdoor space on the roof, room for gardens, covered parking and gated access.

"That's a major requirement. We have to get housing to attract the people we want in the corridor," Cooper said.

The land sits along the 36th Street North corridor, where the city has money for infrastructure if developers start building.

The nearby Wayman Tisdale Clinic, from OU, was the last major investment in the area, but the new building, on the site almost just across the street, would be another step towards rebuilding the economy of north Tulsa.

"We need business, retail development, and we need to find a way to generate sales tax in our community," Turner-Addison said.

The development team has the backing of City Councilor Jack Henderson, who wants to get the infrastructure money moving.

If all goes well, they all hope to be at a ground breaking next spring.

The next step on the project is to go before the city council to start on infrastructure money. That could happen as soon as next week.

If you attended the FIRST FRIDAY

thank you for supporting and spending

money in the north Tulsa community.

If you did not have an opportunity to stop

and purchase fresh fruit and vegetables at

Thank you for patronizing businesses in